DWI Defense | Driving While Impaired by Alcohol or Drugs

Your future can have a serious setback if you are arrested on an OBX DWI and convicted of Driving While Impaired in North Carolina. While people tend to use the terms interchangeably, there is little to no practical difference between DWI and DUI in North Carolina.

Driving While Impaired or “DWI” may be related to alcohol, illegal drugs, prescription drugs, and even over-the-counter medicines. You don’t have to intend to be “drunk driving” or “drunken driving” to be arrested and face allegations of criminal charges in the Outer Banks.

DWI is a criminal offense, often misdemeanor charges in District Court and may also include traffic violations under N.C.G.S. Chapter 20: Motor Vehicles.

A DWI conviction may require jail or prison time, (if the State can prove Grossly Aggravating Factors), community service, fines, probation, loss of driving privileges, greatly increased insurance premiums, the necessity of a Continuous Alcohol Monitoring (CAM) Device, and the installation of a Blow and Go ignition interlock device on every vehicle you own.

DWI charges in North Carolina are serious criminal offenses, that can involve felony or misdemeanor criminal charges, again depending on what happened as a result of the “impaired driving.” DWI can serve as a predicate offense to NC Murder and Manslaughter charges.

A conviction for Driving While Impaired on your record can be a serious detriment to finding gainful employment. It can also affect your personal and professional reputation in the community.

"We take criminal charges like DWI in North Carolina very seriously. So should you. Allegations of any criminal charge, whether misdemeanor or felony charges, can have long-term consequences" – Danny Glover, OBX Lawyer

Where Do You Help People Charged With OBX DWI?

Our law firm provides legal representation throughout northeastern North Carolina, including Elizabeth City NC, Edenton, Gates, Hertford, Camden, Currituck and all of the Outer Banks including:

Danny Glover, Jr. has extensive experience defending clients charged with OBX DWI. He has for years taught attorneys across the state in numerous aspects of the NC DWI laws and DUI defense continuing legal education classes. Glover Law Firm can help you fight your DWI charge.

Consequences of Driving While Impaired – DUI Driving Under the Influence 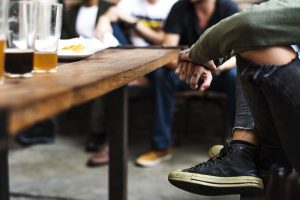 In North Carolina, the laws and penalties governing DWI Driving While Impaired are complex. For each offense, the penalties OBX DWI LAWYERSrange from the least severe (Level 5) to the most severe (misdemeanor Level A1 or Felony Habitual DWI). The levels are determined by grossly aggravating factors, aggravating factors and mitigating factors. Call now for more information about DWI charges in North Carolina for some in-depth answers to common questions.

The consequences can extend far beyond what you may imagine. You will have two issues to address, initially – your criminal charges and a possible automatic suspension of your driver’s license if you refuse to submit to a breath test (Willful Refusal) or provide a breath sample of 0.08 BAC.

For felony DWI charges (Habitual DWI in North Carolina), you may have the issue of bail to address as well.

If you have another DWI conviction in the past 7 years, jail time can range from 30 days to several years, fines up to several thousand dollars, a driver’s license suspension of one to four years, no work permit or limited driving privilege, and an interlock ignition device installed in any vehicle you own…when you are finally allowed to drive again.

If you have two DWI conviction in the past 7 years, jail time can range from 60 days to several years, fines as determined by the offense, a driver’s license suspension of at least one year (or a permanent revocation if the last conviction occurred within the last five years), no work permit or limited driving privilege, and an interlock ignition device installed in any vehicle you own…when you are finally allowed to drive again.

When arrested for a DWI/DUI offense, other circumstances could elevate the seriousness of the crime.

Aggravating Factors for DWI sentencing in North Carolina include:

Except for the factor in subdivision (5) the conduct constituting the aggravating factor shall occur during the same transaction or occurrence as the impaired driving offense.

Mitigating Factors for DWI Sentencing in NC include:

Except for the factors in subdivisions (4), (6), (6a), and (7), the conduct constituting the mitigating factor shall occur during the same transaction or occurrence as the impaired driving offense.

Danny is passionate about protecting your rights and pursuing every possible avenue that could achieve a positive outcome for your DWI charge. Danny’s personal, aggressive approach involves building a powerful defense case that will be based on a number of factors, including:

Danny initially focuses on finding a way to beat your case outright under the law. If that is not possible, then he will explore the possibility of having your charges reduced as much as possible. If neither of those options are available, he will work to reduce your punishment as much as is legally possible, including fighting to get you a limited driving privilege, if one is allowed in your case, so that you can get to work or school, alcohol classes and maybe even for personal errands

Glover Law Firm serves as legal counsel for individuals charged with DWI in many NC communities, including the Outer Banks, Elizabeth City, Currituck, Camden, Hertford all other communities or rural areas in northeastern North Carolina. Our firm stands ready to move into action for your defense.

If You Had a OBX DWI, Contact Us Today

Call us toll free and speak with a knowledgeable attorney about your case, or use our online form so we can review the facts in your case quickly and efficiently. We are ready to get to work for you, and our initial consultation is without charge, so you can learn what we can do for you without obligation. Don’t wait. Call today.

Criminal Defense
North Carolina Criminal Law Updates - DWIs
Client Reviews
★★★★★
"I highly recommend working with Glover Law Firm. I live outside of the state and had a traffic citation in NC that would have required me to return to the state for court. Glover Law Firm was able to represent me for my court date such that I did not need to appear, and they facilitated a very positive outcome for me. I felt that the fee I paid Glover for their services was completely fair and reasonable for the time and money I saved." Bondwc WC.
★★★★★
"Danny Glover is the most meticulous and detailed lawyer I know. As a DWI Services provider in NC, I've had nothing but the best feedback from my clients about his legal services. If you want to feel like you matter but also get professional legal services, Danny is your go to." Anna Coker
★★★★★
"I hired Danny Glover to represent my daughter in a traffic violation. He did an amazing job at handling her situation quickly. I can't say enough about the way he generally care for his clients. If I ever need legal help or advice again, Danny Glover is who I would call." Leigh H.
★★★★★
"I have used Danny Glover on numerous SERIOUS felony charges and also traffic misdemeanor charges for the last 15 years. He has beat or gotten every single charge I've had reduced or dismissed the man is a beast! Top Notch!" Shane Howard
★★★★★
"Danny Glover is by far the best lawyer that I have had represent me. I can only give 5 stars but he deserves more than that. His staff was extremely personable and professional. If you have a traffic citation in an area covered by Mr. Glover, you would be a fool not to hire him and his staff to represent you." Sean M.
View More
Submit a Law Firm Client Review